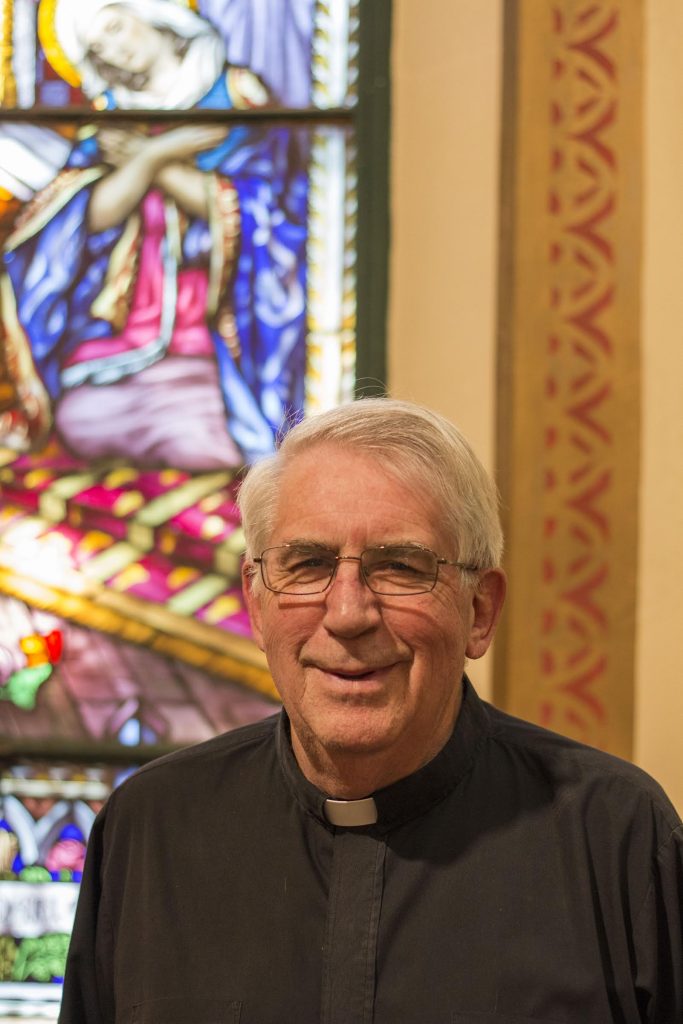 Twenty-seven year old Richard Lavalley was ordained to the priesthood on May 16, 1964. In his more than fifty years as a priest, Msgr. Lavalley has worked tirelessly for thousands of parishioners and, at a time when many of his peers are retired, he shows no signs of slowing down. Besides presiding over Saint Francis Xavier Parish and School for the past 22 years, he is also the Vicar for Clergy for the Diocese, a member of the Rice Memorial High School Board, and Chaplain at Norwich University.

Msgr. Lavalley has always had a love for Catholic education. His first assignment as a priest was at St. Peter’s in Rutland where he was active at the parish school and taught religion at nearby Mount St. Joseph Academy. He served as principal there for nine years. Even after leaving Mount St. Joseph for parish and diocesan work, Msgr. would make a point of serving Mass or teaching classes at local Catholic schools.
Msgr. Lavalley began his priestly ministry as associate pastor of St. Peter Parish in Rutland, VT(1964-1968). His next series of positions were in the field of Catholic High School Education. He served on the faculty of Rice Memorial Catholic High School in South Burlington (1968-1969). Msgr. then served on the faculty of Mount St. Joseph Academy in Rutland, while also serving as Chaplain to the Sisters of St.Joseph (1969-1975). He then was appointed Principal of Mount St. Joseph Academy (1975-1982). Upon the completion of this assignment he served briefly as Pastor of St. Patrick Parish in Fairfield before assuming the responsibility of Vocations Director for the Diocese of Burlington (1982-1991).
He then was named Pastor of St. John the Evangelist Parish in Northfield (1990-1991). He is presently serving as Pastor of St. Francis Xavier Parish and St. Francis Xavier Grade School in Winooski,VT (1991 – Present).
Msgr. Lavalley has served the Diocese as Executive Director of Camp Holy Cross, as a longstanding member of the Priests’ Personnel Committee,Vocation/Seminarian Board, Chaplain to the Sisters of Mercy Mother House, one of two Catholic Chaplains to Norwich University located in Northfield,VT and as Episcopal Vicar for Clergy for the Diocese of Burlington.
He is presently Dean of the Winooski Deanery since July 1, 2006. Msgr. LaValley is a very gifted priest who is loved by many. He is a highly acclaimed homilist and devoted to helping all in need. His is a message of God’s infinite love and mercy and most particularly to know and love the Holy Eucharist.
Msgr.often mentions his special connection to Our Lady of Perpetual Help. “She has been with me all the way,” says Monsignor, speaking of his life as a priest. “She is the first one I go to in the morning and the last one I go to at night.” It is fitting that a priest who perpetually helps others feels a bond with Our Lady of Perpetual Help.

Thank you, Monsignor, for all you do.