Our Lady of Perpetual Help Story

Our Lady’s Golden Crown was placed on the icon by order of the Vatican in 1867; it is a symbol of the many miracles performed by Our Lady while invoked under the title of “Our Lady of Perpetual Help”.  The child Jesus’ crown was also placed on the original icon by order of the Holy See in 1867.The star in the center of Mary’s Veil is a the symbol for the “Theotokos” which means the “God bearer” in Greek or Mother of God. It is also indicative that she is the “Star of the Sea” who bore the light of Christ into our darkened world.  This star leads us to the safe port of Heaven.The primary initials on either side of Our Lady’s Crown are the Greek initials for “Mother of God”The initials above the angel on the left are the Greek initials of St. Michael the ArchangelThe angel on the left, St. Michael, is depicted holding the lance and gall-sop, foreshadowing Christ’s Passion and death.Our Lady’s Blue Garment is the color worn by mother’s in Palestine, symbolic that Mary is both Virgin and Mother.Mary’s red tunic underneath is the color worn by Virgins during the time of Jesus.Both Mary and Jesus’ Clothing are colors of royalty.
Our Lady’s face is peaceful, serene, and contemplative of her son Jesus’ future sufferings.Our Lady’s mouth is tiny and silent for prayer, meditation and recollection.Mary’s eyes are large to see our troubles and needs; they are always turned toward us.  They also tenderly plead for us to avoid sin and remain faithful to and love her son, Jesus.
The entire golden background is a symbol of Heaven, where both Jesus and Mary are now enthroned; this Light of Heaven raidates through both of their clothing: an indication of the heavenly joy they bring to human hearts.
The initials above the angel on the right are the Greek initials of St. Gabriel the Archangel.The angel on the right, St. Gabriel, holds the cross and the nails, foreshadowing of His Passion and death.The hands of the angels are covered in a veil much like that which the priest holds while blessing with the Blessed Sacrament in the monstrance during Benediction.The initials to the right of Jesus’ head are the Greek initials for “Jesus Christ”.The child Jesus is depicted not as an infant, but as a “miniature adult”, signifying Christ’s divinity and His humanity. Mary’s hands hold the child Jesus possessively and lovingly, because she is his Mother.  She, too, is our loving Mother.  Her hand does not clutch the hands of Jesus’ tightly, but remains open, inviting us to her son, Jesus.Jesus’ hands are turned downward, a symbol of His placing the Graces of Redemption in her hands.  These Graces are available to any and to all who implore her for them through prayer.Jesus’ sandal falling from his foot is indicative of the haste with which he has run to her in fear, gazing at the angels who hold the instruments of his Passion and death.   The loose sandal also represents Christ’s divine nature, untied from the bounds of earth.  The sandal that remains secure is symbolic of His human nature.
https://www.catholiccompany.com/content/our-lady-perpetual-help-icon-meaning.cfm 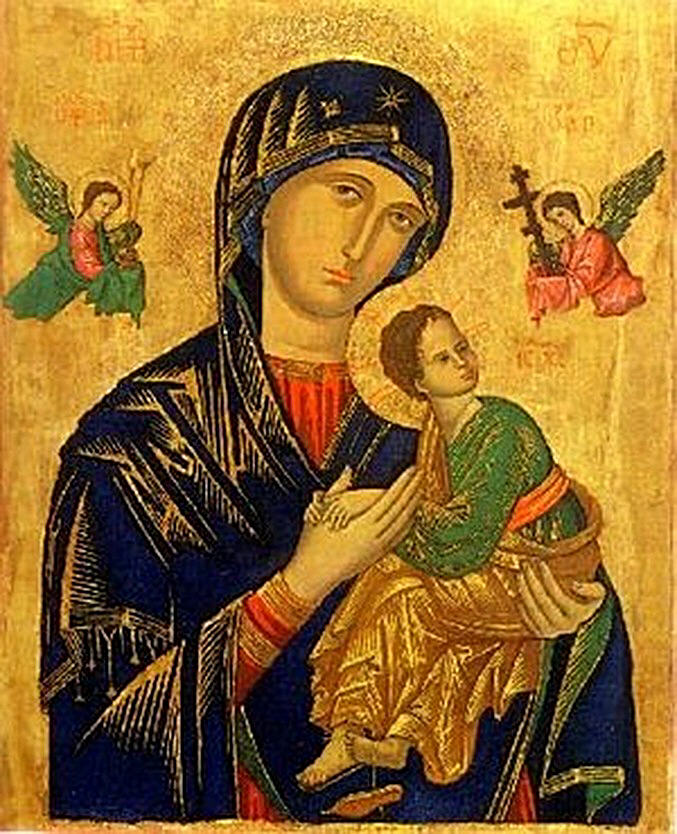 The image of Our Lady of Perpetual Help is an icon, painted on wood, and seems to have originated around the thirteenth century.  Traditionally, the image is also known as “Our Lady of Perpetual Succour.”  The icon (about 54 x 41.5 centimeters) depicts our Blessed Mother Mary, under the title “Mother of God,” holding the Child Jesus.  The Archangels Michael and Gabriel, hovering in the upper corners, hold the instruments of the Passion– St. Michael (in the left corner) holds the spear, the wine-soaked sponge, and the crown of thorns, and St. Gabriel (in the right corner) holds the cross and the nails.  The intent of the artist was to portray the Child Jesus contemplating the vision of His future Passion.  The anguish He feels is shown by the loss of one of His sandals.  Nevertheless, the icon also conveys the triumph of Christ over sin and death, symbolized by the golden background (a sign of the glory of the resurrection) and the manner in which the angels hold the instruments, i.e. like trophies gathered up from Calvary on Easter morning.

In a very beautiful way, the Child Jesus grasps the hand of the Blessed Mother.  He seeks comfort from His mother, as He sees the instruments of His passion.  The position of Mary’s hands– both holding the Child Jesus (who seems like a small adult) and presenting Him to us– convey the reality of our Lord’s incarnation, that He is true God who became also true man.  In iconography, Mary here is represented as the Hodighitria, the one who guides us to the Redeemer.  She also is our Help, who intercedes on our behalf with her Son.  The star painted on Mary’s veil, centered on her forehead, highlights her role in the plan of salvation as both the Mother of God and our Mother

According to popular tradition, a merchant acquired the icon of Our Lady of Perpetual Help from the island of Crete and had it shipped to Rome towards the end of the fifteenth century.  During the voyage, a terrible storm arose, threatening the lives of all on ship.  The passengers and crew prayed to our Blessed Mother, and were saved.

Once in Rome, the merchant, dying, ordered that the image should be displayed for public veneration.  His friend, who retained the image, received further instructions: in a dream to his little daughter, the Blessed Mother appeared and expressed the desire for the image to be venerated in a Church between the Basilicas of St. Mary Major and St. John Lateran in Rome.  The image, consequently, was housed at the Church of St. Matthew, and became known as “The Madonna of Saint Matthew.”  Pilgrims flocked to the church for the next three hundred years, and great graces were bestowed upon the faithful.

By divine providence, the forgotten image was rediscovered.  In 1866, Blessed Pope Pius IX entrusted the image to the Redemptorists, who had just built the Church of St. Alphonsus, down the street from St. Mary Major.  As a boy, the Holy Father had prayed before the image in the Church of St. Matthew.  He ordered the public display and veneration of the image, and fixed the feast of Our Lady of Perpetual Help as the Sunday before the Feast of the Nativity of St. John the Baptist.  In 1867, when the image was being carried in a solemn procession through the streets, a young child was cured, the first of many recorded miracles attributed to Our Lady of Perpetual Help.

To this day, the Church of St. Alphonsus displays the icon of Our Lady of Perpetual Help and welcome pilgrims for prayer.  May each of us never hesitate to invoke the prayers and intercession of Our Blessed Mother in time of need.