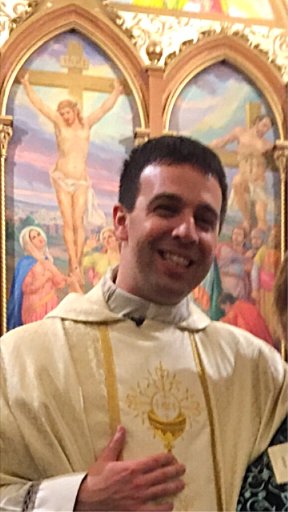 Father Scott Gratton grew up in Newport, VT, attending the local Catholic and public schools. After graduating from Middlebury College in 2009, Fr. Gratton studied at Providence College before entering major seminary at the Pontifical North American College in Rome, where he learned Italian and had the honor of assisting at Mass with Pope Francis. As a seminarian, he spent summers with the Totus Tuus program for children throughout Vermont. He was ordained to the Holy Priesthood in 2015 and is currently the parochial vicar at Saint Francis Xavier and the head Chaplain at Rice Memorial High school. Father Gratton is a very active and joyful presence at St. Francis Xavier parish and school, helping to teach religion classes and participating in a wide range of activities such as sporting events, field trips and celebrating parish and school Mass. He is a very talented musician and has taught music classes for the school as well. He enjoys playing all instruments, especially the banjo, and likes soccer, rugby and fishing.